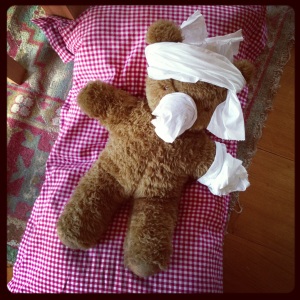 Use it or lose it. That’s how the mantra goes.

But what you don’t hear often enough is that too much ‘using’ can make you lose  it as well, unless that is, you look after yourself.

The downside is that this means incorporating stretching into your routine, become friends with the foam roller and golf ball for myofascial release and getting the odd sports massage or physio. All of these cost time and money (unless you have a handy sports masseuse as a friend) and worse still, causes a considerable amount of discomfort which can make it easy to find an excuse not to do it. I’ve been adding all the above to my daily and weekly routine but my legs are resolutely tight and causing me issues and my trainer gave me a ticking off for not doing enough. So, I will have to up the time, increase my pain threshold…it hurts my quads sooo bad…and finally I must bite the bullet and actually ATTEND a yoga for runners class rather than just write on it on every ‘to do’ list I ever write.

Do you find the foam roller staring at you feeling unloved in the corner of your room or are you a fanatic about muscle hygiene? 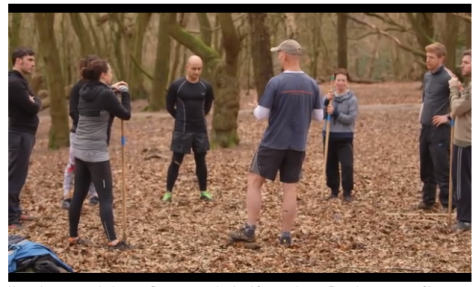 When I bang on about Wildfitness this is what it means…less gadgets, more being outdoors and hopefully a bit of a laugh. I tend to hate see myself on screen (and working in TV I had to think up many excuses to avoid it) but for some reason in this it’s not so bad at all.

Six months ago my fitness goals for this year would have been different than they are now. I would have listed possible achievements that centred around speed – a sub 21 min 5k, a 1:45 half marathon and a 3:40 marathon. I had reached a level of fitness and confidence that meant these were within reach. However, with the current state of my ankle these will not happen this year.

Me, a stress fracture and an aircast boot.

I truly never appreciated being able to run until I couldn’t do it. I loved running but I took it as a given. Other than the twisted ankle, slight pull or tight IT band I hadn’t suffered a real injury.

This year has been a lesson in understanding the frailty of my body and the discipline it takes not only to get my fitness back but the patience you need in order to do so too.

Without any experience of real injury I assumed my slightly bruised and sore outer ankle was as a result of a knock or bump and ran a half marathon on it. Most runners will tell you that they run on a niggle and is usually sorts itself out during the run, the kind of niggle that presents itself on or just before race day is often psychosomatic – the manifestation of pre race nerves. By mile 6 I knew my ankle was hurting more, not less and this wasn’t a phantom pain brought on by expectation of the event. Sure enough, by mile 9 I was limping heavily as I ran. I told my Dad, who I was running with to run on as I was slowing significantly and ran / walked for the next 3 miles. But just before the last mile on a downhill stretch the pain became too great and I dragged my left foot the last mile like Quasimodo, taking almost 20 minutes to complete that home stretch. When I got home I went through the usual Ice, Compression, Elevation routine but I knew it wasn’t going to be that simple. The next day at 7am I got a cab to A&E. It took two weeks on crutches, X-Rays and CT scans to finally diagnose a stress fracture of my tibia just above the ankle.

It’s been four months since that day and, whilst the pain is no longer there, I’m still not running again. I’ve tried the odd jog of a minute or so and one 10 minute session on the treadmill but otherwise I’ve become expert at researching on the internet what I CAN do in the gym and tried to forget about what I can’t do. To begin with I concentrated on weights – sitting down or kneeling and working on my upper body. Then I progressed to kettle bell swings with a low weight to try and get that cardio feeling back, shallow squats and later the stair master when the boot could come off for a few hours a day (going up stairs was no problem…down was another matter entirely). Once the aircast boot came off altogether I added in HIIT on the cross trainer and walking on a steep gradient on the treadmill and in the last three weeks I started squatting with weights on the smith machine and working my legs with free weights and the machines in the gym. Whereas before I only used one or two areas of the gym I can now say I use the entire gym…even the free weights room that is usually the preserve of the guys.

I can’t pretend I haven’t been mightily pissed off at times – I get jealous when I see people running outdoors and I really miss Crossfit, especially the social side of having people to work out with. On the plus side however I have begun to understand so much more about fitness training as I had to seek out exercises I could do. I have discovered a weird admiration for the stair master and my arms are definitely more defined than they were back in the beginning of April when they took a back seat to running  and running and more running. I can’t work out to the same intensity these days and I’m longing for and dreading my first proper run because what if I get injured again? After this experience I think that fear will always be in the back of my mind, but maybe it’s a good thing and will stop this ever happening again. Here’s to hoping!

1) Stop worrying about what other people are thinking. Right now. No, stop. Don’t ever think you can’t run outside because people will stare at you. I promise you if anyone is looking and they aren’t also running they are marvelling at just how badass you are or a thinking about when they can do their thing and be badass too. Give no more thought to other people in the gym, unless it’s to be nice to courteous to them. No one is laughing, you’re getting fit and that’s something that is never to be laughed at. Everyone, and I do mean everyone, who is exercising automatically belongs to the club, congratulations you’ve joined, smile on your way past.

2) Record what you do. If you just go and half heartedly press a few dumbbells or jog on the treadmill for a few minutes you’ll never get anywhere. Trust me, I’ve tried that. Fitness is about progress and progress needs to be tracked. Use your iphone, a notebook or if you have the capacity, your memory, and make sure you’re pushing yourself onwards.

3) Which brings me neatly to – goals! Have them. Try not to make it “I want to feel good in a bikini”, because that isn’t a goal, it’s a state of mind. It might happen after reaching your goals, but it’s not a goal in itself. Perhaps you want to run for 10 minutes without stopping or do a pull up.  It might seem small but it gives you something tangible to work towards. By all means add bigger goals like a marathon or a crazy time  for ‘Fran’ but make sure you keep sight of the small stuff – it really is where the sweat reaps the rewards.

4) Eat well. That Pret sandwich? It’s not healthy, put it down. Say hi to your kitchen and start using it. Cooking my meals from scratch MADE THE BIGGEST DIFFERENCE. It takes time, sure, but it’s time well spent. Try and make it a habit – when you’re cooking one meal why not add more veggies so you’ve got them cold for tomorrow? Or also pop those chicken breasts in the oven as you’re making your pasta? You’re already cooking, so cook more and eat it for lunch or dinner when you know you’ll be late home and thinking a pizza would be quick and easy right now.

5) Stick at it. It took me years to get in the habit of exercising daily but now it’s something I just do. Eating was easier, after about 6 months I changed the way I eat permanently and although I have the odd slip or fortnight off when on holiday I more or less stick to it. Don’t give up after a month, keep going, it’s worth it, it really is.

I’ve never been the fittest person. I like wine too much and have a penchant for eating vast quantities of food. The fitness and exercise industry is often full of these seemingly perfect specimens, people who say things like “I don’t like the taste of alcohol” (WHAT!?! let me introduce you to wine…) are in possession of sculpted abs and who seem to never get tired or demotivated or have an ‘off’ day. Whilst I do not belong to the upper echelons of the uber disciplined (my stomach alone is testament to that) I have my found myself a member of a more unique club and one with easier joining rules – me, but fitter.

Ten years ago I was 24 and I shudder to think of what put my body through. Ten pints? No problem. Fried chicken for dinner? Yes please. I didn’t exercise in the slightest but every now and then I’d don my Nike leggings and attempt to run around the block, giving up heaving and exhausted after about 5 minutes. Nope, I just wasn’t built for fitness I’d say to myself. Best sit down and watch Holby City to recover.

Today a short run would be 30 mins and running for an hour or four is no biggie. I have also taught myself to push the limits. I used to be uncomfortable with any kind of pain or discomfort but now I know my body and what it can handle, and as a result of this I have become to accustomed to achieving things I thought unlikely by employing that old mind over matter thing. I still go out and get absolutely trollied once in a while, I still skive off the gym or decide to have a lie in, but more often than not I do head out to get my sweat on because I know I will feel so much better for it.

I’m not an industry professional, I’m just someone who found a way to get fitter and stay fitter. I get asked by people who know me (and some I don’t) how I did it, so SEE MY SWEAT will give my answers from food to workouts, motivations to new goals. They won’t work for everyone, but they worked for me.

Oh god, maybe I am one of those people…